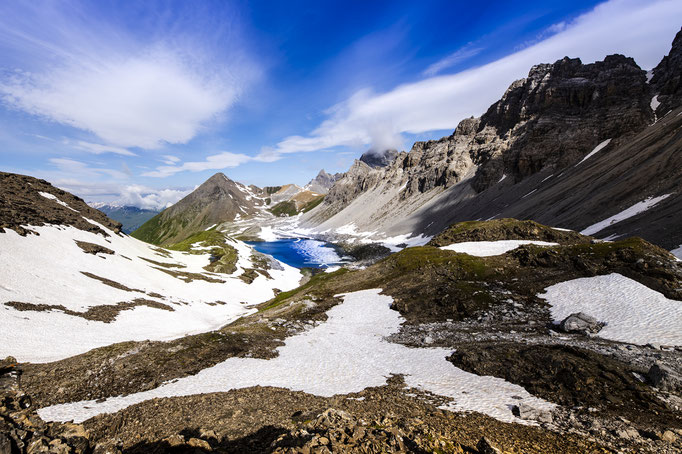 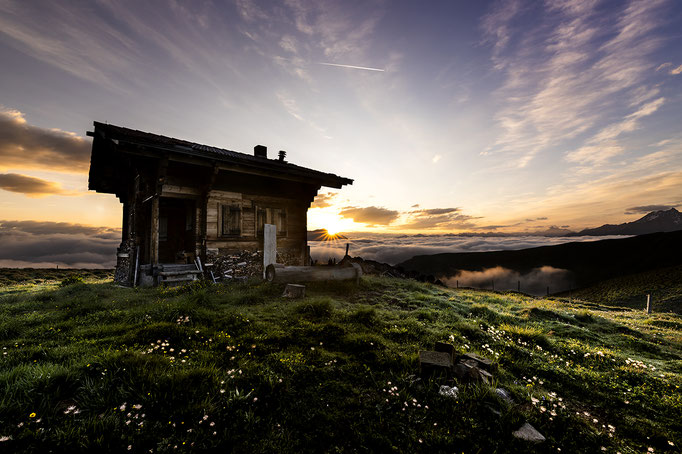 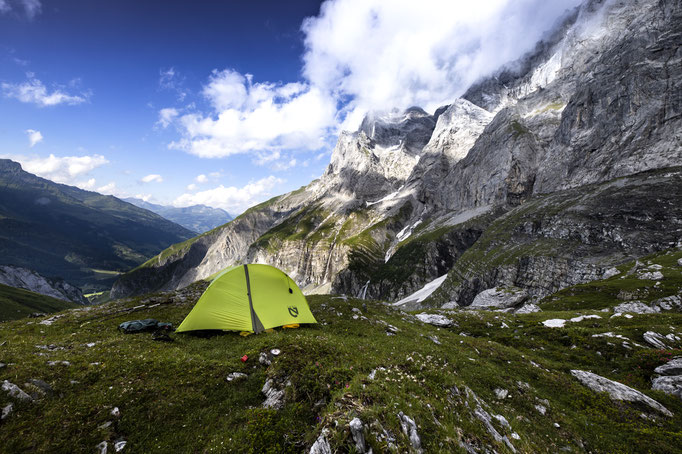 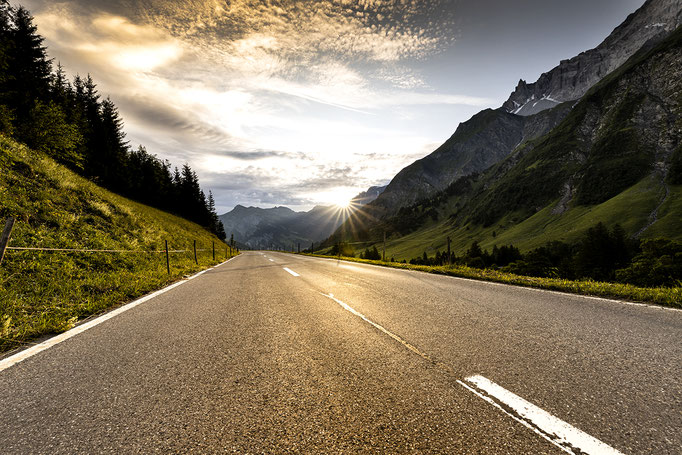 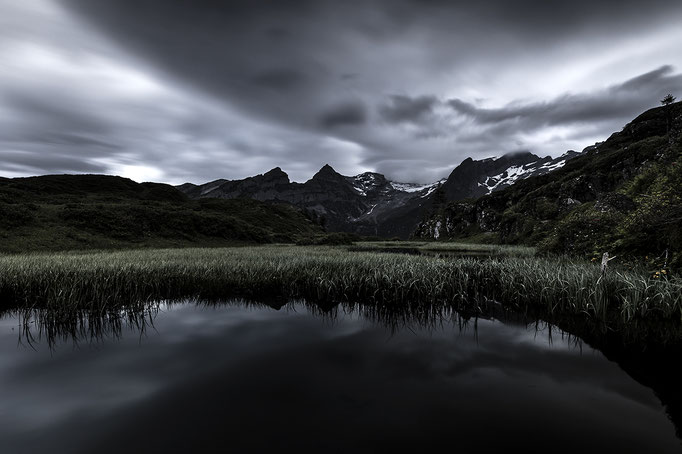 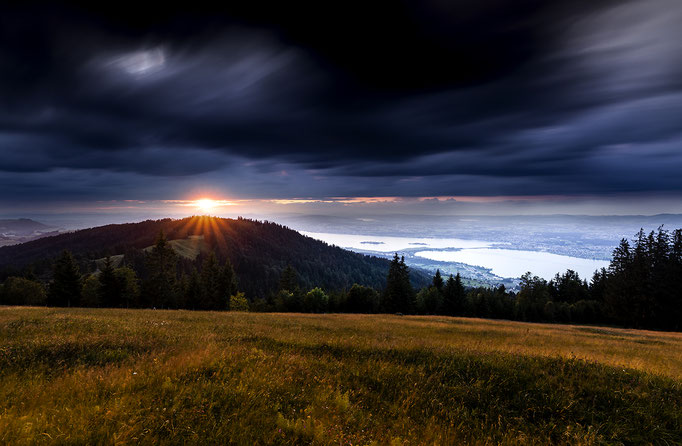 Since I had such a good time on my last year's hike from Samedan to Wetzikon, I decided to tackle a remake of the hike mid-July. This time though, the route would take me further south via Crap Alv, Furschella da Tschitta, Savognin, Muttlerhorn, Thusis, Glaspass, Güner Lückli, Val Lumnezia, Panixerpass, Richetlipass, Lintal, Braunwald, Silberen, Wäggital, Stöcklichrütz and Seedamm - camping and camera gear in my backpack.

Just a short day to warm-up. Not too much to write about. Still... it's quite an important stretch I  cover today, since tomorrow's route will take me through the nature reserve "Parc Ela", where camping is not allowed. Without the distance I cover today, I wouldn't be able to cross the reserve tomorrow.  I leave for my hike straight from work. Saves me a bit of time. At around 1530, I walk along the airport's runway, pass abeam Bever and Spinas while following Val Bever upstream. Dark clouds are looming over Crap Alv, todays highest point. And sure enough, just after crossing the steep but technically easy pass, I get soaked in a heavy rain shower, which turns into persistent rain once I arrive at my camp spot at the Lajets Crap Alv at 1830. Pitching a tent in rain: never too much fun. However, there aren't many other options. 5 minutes later, I'm eagerly waiting in my tent for the rain to pass so I can flinally cook my dinner. An hour later, the rain finally eases and shortly after the couscous is ready to eat.  Surprisingly, the cloud cover clears completely towards midnight. What a great opportunity to shoot the stars!

After the previous short day, today's a totally different animal. More distance, more climbs and descents. Hence I leave my camp with first light at 0500. Initially descending on an overgrown, wet track to spectacular Laj Palpulogna, from where I climb to Furschella da Tschitta. With my legs still in fairly good shape, I climb the 1200 vertical metres to the highest point of my entire hike without much effort. The nice trail certainly helps. A bit of hard pressed snow is slowing me down on the last few metres though. Once on top of the pass, the view down the snow covered slopes to the partly ice covered Lai Grond is spectacular, the hike down these exact slopes not so much. It's a rather annoying and slow going undertaking on the northerly facing, slippery slopes.  Eventually, I reach the lake from where it's easy going all the way to Savognin. Still, it's seems to take forever until I reach the village. From the village, another 1400 meter climb takes me up to the monastery Ziteil. After being lucky with the weather, a rain shower annoys me just before reaching the monastery. This climb is not easy going anymore and I'm more than happy once I reach my camp spot close to Muttnerhorn just after 1900. After a quick dinner I decide to call it a day to get as much rest as possible before tackling yet another long day tomorrow.

The day starts with a 1800 metre descent from my camp spot down to Thusis. While the first part of the descent past Muttner Alp offers some spectacular views of the cloud covered valley under the rising sun (photo), the second part is all through boring pine forest, steep and because of the rain that fell overnight, very slippery. It seemed to take forever until I finally reached Thusis with glowing knees. But no time for a rest. Thusis is my resupply point, where I get food for the next five days. Nuts, dried fruits, pasta, tick repellent and biscuits making my backpack much heavier. The good thing though: It will get lighter with every bite I eat :) It takes me a good half an hour to repack and getting rid of useless packaging. Since I can't carry all the calories I need while hiking such long distances with all these climbs, I stuff as much food in my body as I can while in town. Chips, chocolate bars, a whole bread and some grapes for the good conscience. A strategy, which I applied while hiking Te Araroa.  With a stuffed belly and full backpack I climb over Glaspass to Safien Platz and from there up to windy Güner Lückli, where I arrive at 1800 and where I was initially planning on staying. Since the pass is covered in clouds and snow, I decide to continue on and descend towards Duvin. My legs are still tired from today's first long descent, thus making that last stretch slow going. Close to Duvin, my legs scream stop and I pitch my tent on a freshly grazed paddock right in time for sunset. Perfect :)

The cows, which nicely grazed my camp spot got curious and checked out the guy, who was camping in their paddock.  They  approch me, while I'm getting ready to leave. Since I'm not in a rush, I give them a big scrub before I set off. To be honest, there is not much to write about the first half of the day. Lots of road walk, lots of ticks I pick up while walking along overgrown, undulating tracks.  The interesting part starts once I cross the Vorderrhein around noon and start the long climb to Panixerpass.  Initially along a tar-sealed road to Pigniu, my route takes me sidling high above Panixersee, where a misstep would mean a long tumble down. Once past the lake, I cross a gorge via a very sketchy looking leftover of an avalanche, under which I assume hides a bridge somewhere. Carefully, I place one foot in front of the other, hoping not to fall through. Obviously I didn't, otherwise I wouldn't be wiriting  this ;) Once across the snowfield and a large flat, a last steep climb takes me up to Panixerpass Hütte, where I cross the border and finally leave the Canton Graubünden. Ciao Grischun, hello Glarus! It's only mid-afternoon and after a short break and a call to the range officer of a firing range, which I intend to cross tomorrow, I continue my hike down towards Wichlen. The northernly facing slopes don't get a lot of sun, hence most of the descent is still covered in snow. It looks like the snow won't melt at all until next winter. Amzing how much snow lies around. Doesn't matter whatsoever, as the terrain is not too steep. Once out of the snow, I spot a lovely flat above a waterfall. Since my legs are still a bit tired from the previous days, I decide to pitch my tent to get some rest to be ready for another long day tomorrow.

After a good night’s sleep, I leave my camp spot and descend Wichlen, where I walk past several tanks, eyed suspiciously by a guard, probably thinking ‘what’s this crazy guy doing here at six in the morning?!?’ After a bit of roadwalk (which is usually unavoidable on a thru-hike but can be nice as well as the photo shows), I leave the valley and climb up towards Richetlipass. Shortly before reaching the pass, I spot another army guard, chilling in fron of a hut in the warming morning sun. That would have been my dream posting during my military service ;) A bit of easy scrambling to avoid a snow field takes me over Richetlipass. The descent into Durchnachtal is steep but never difficult, opposed to what comments state online. I cross another hiker. Before even talking to him, I know he’s a thru-hiker. We stick out like a sore thumb. Since we have similar mindsets, the talks are usually very interesting. No exception this time. Shortly past noon, I reach Linthal. After nearly five days, it’s a nice change to use a real toilet. From there, a climb up to Braunwald follows. Even though the village looks quite picturesque, I don’t really have time to stop and continue my climb up towards Untere Bützi, where the landscape changes completely. It’s a high flat, mostly covered in snow. Together with the rain, which just started after reaching the flat, and the resulting poor visibility, navigation is tricky and progress slow. Still, I decide to press on, to get at least out of the snow covered area. Weather is deteriorating rapidly and I try to speed up. Doing so on top of the wet snow is risky. And sure enough I break through the wet snow several time, hitting the rocks below. At one point a sharp rock is slashing open the skin on my shin. Lot of blood but luckily not very deep. Could have ended much worse. It’s a sign for me to finally look for a camp spot, which I find in a place called Dräckloch (meaning Shithole in English). The place is not as bad as its name suggests. No snow and once the weather clears later in the evening, the views of the mountains are impressive once more.

The end is getting closer! I have hiked far more than half and from tonight’s camping spot I would already see Wetzikon. However, it is still a few steps to walk today. The first of these steps are on a great trail heading towards Glaspass. No snow, spectacular views. Way too soon, I have to leave it and start a debilitating descent into Klöntal. The trail changes from amazing to disastrous within meters. I curse the whole way until reaching the bottom. Why marking a trail when noone maintains it? I have a hard time understanding it. Nevertheless, no other option than to just keep going. As a reward, I spot some blueberries on the climb out of the valley. Very surprised to find them early in the season. For the rest of the day… well there is not too much to write about. An undulating hike partly over rocky terrain, through forest and bogs. Thunderstorms are building up all around me. Since I’m not too much in a hurry, I try to find shelter under trees or cowsheds, when cell offloads its water. Most of the time I’m quite successful. At around 1900, I reach Stöcklichrüz, my stage finish. Sure enough, Wetzikon is visible in the far distance. Pitching the tent right on top of the hill (no mountains here any longer), would offer spectacular views but in regard of the thunderstorms, I decide to pitch my tent close to a abandoned hut to get some shelter. A good decision in hindsight.

A short descent to Lake of Zurich, which I cross via Seedamm and from there all along gravel roads to Wetzikon. Simple as that. While these gravel roads a certainly good for smashing those last kilometres, they are also quite monotonous and tiring, leaving plenty of time to reflect the last few days. Days, which have been physically challenging. Long days with many climbs and descends. Beside hiking, eating and sleeping, there wasn’t much time for anything else. But for me, these basic things are all I need to be happy. Still, I don’t mind having a real, healthy meal and a hot shower after nearly seven extremely tough days on the trail.