With temperatures forecasted way north of 30°Celsius for the flatlands, it is an obvious decision that I’d remain in the mountains during my two off-days. More precisely my 3 day/2 night hike would take me from Maloja to the Marmorera Dam. Since the first leg from Maloja to Lägh Lunghin is a short one, I decide to head for the trail head right after work. Leaving from work at 17:30, I initially return to my flat to grab the pre-packed backpack. At 18:00, I board the bus to St. Moritz, where I connect to another one, taking me all the way to Maloja Capolago, where I arrive at 19:15. The sign predicts a 2 hours hike up to the lake. 4 kilometer and 600 metres in height. As I would still have to find a suitable spot to camp, I have no time to spare. The track is a popular one well recognizable. Albeit steep in parts, easy to hike. Progress is good and after crossing some late comers descending to Maloja, I reach the lake at around 20:30. With the sun already hiding behind the mountains and the stiff Maloja Wind still blowing, it is unpleasantly cold. Therefore, I pick the first best place to pitch my tent, into which I retreat shortly thereafter. No cooking tonight as I already ate in the bus.

The wind is blowing throughout the whole night, which I think is rather unusual. After the busy previous day, I take it slowly, leaving for Piz Lunghin at around 07:15 (a late start for me!), following an unofficial but fairly well marked track. About halfway to the top, I leave my backpack behind, as I do not want to scramble up the mountain with 15kg on my back.

The track follows the northern mountainside over scree. Easy to hike. Only once it joins the blue/white track for the last 200 metres, a bit of rock scrambling is necessary to get to the top, which I reach shortly before 08:00. Again, nothing difficult, still: better hold on tight! It is a long way down.

However, the 360 degrees views from Piz Lunghin are spectacular, ranging from Bregalia all the way to Pontresina with the mighty Bernina in the background dominating the scenery.

I’m absorbing the views, have the mountain for myself and not in a hurry to climb back down.

About half an hour later, I’m scrambling down, leaving the official trail again to get my pack. A short hike takes me to Fuorcla Lunghin. Nothing special about that saddle if it was not for the water divide. A drop of water might either join the Inn, ending up in the Black Sea, flowing down the Rhine towards the North Sea or heading south into the Mediterranean Sea.

From the pass, it’s a one hour descent to Septimerpass, easy going even a bit boring. I spend the time talking to a couple that also camped near Lägh Lunghin. They are tramping in the Alps for several days (lucky them!) and heading to Vicosoprano. During the descent, I’m able to spot Forcellina, pass number three for me today. The 1-hour climb up there isinitially through alpine pasture, passing some alpine tarns than into scree. The trail gets busy. Talking to some of the hikers, I find out they mostly hike from Juf to Maloja. Seems to be a popular route. My legs feel tired so I take another rest on top before continuing to Uf da Flüe. Once I leave the trail leading to Juf, going gets a bit rougher. The climb up to Uf da Flüe is steep, a trail mostly non-existent. After enjoying the view for a while, I set off for the Flüeseen, my campspot for the night. Initially I’m continuing along the non-existent trail before joining the Walserweg, which takes me to the Flüeseen. It’s only 15:00 so I decide to explore the area called Seeflüe a bit, which turns out to be quite interesting. Especially the area around Fallerfurgga (which I should cross again tomorrow) leaves a very wild impression. After having afternoon tea at a small, unnamed lake I had back to the Flüeseen and pitching my tent. Compared to yesterday, it’s a warm, pleasant evening. I take some photos of the scenic flat before cooking some Couscous. Haven’t eaten it since New Zealand. Quite a shame since it’s so light to carry yet so tasty. Well after a long day with lots of hiking, most things taste like cooked from a pro :D

Once the sun sets, it’s getting cold pretty fast. The sign to go slip into my sleeping bag. The moon is shining bright. In fact it turned into a bright orange when I wake up shortly past four in the morning. Even though it’s freezing cold, I force myself out of the sleeping bag to snap some photos. Looking at the photo below, I think the effort is well worth it!

From Marmorera, only two busses a day leave back to the Engadin. One at 10:30 the other one in the late afternoon. Because there are still are some things I need to do at home, I decide to catch the former, meaning I have to leave at around 06:00, initially up to Fallerfurgga again, where, due to the wind-chill, it’s even colder. Still, I take some more photos before starting the long descent to Tga. Scree and the odd snowfield as well as a river crossing make the descent interesting but also a bit slow going. Once I reach the Alpine pasture, going gets easier and the temperatures more pleasant. Progress is better than expected and once I’m sure I will be at the Marmorera Dam well ahead of 10:30 I slow down a little. I leave the Walserweg and ascent towards Tgarnet to avoid some impressive steep drops. A last short climb takes me up to the Dam. Unfortunately, a sign prohibits swimming. Understandable but it would have been an nice end of a very enjoyable hike. 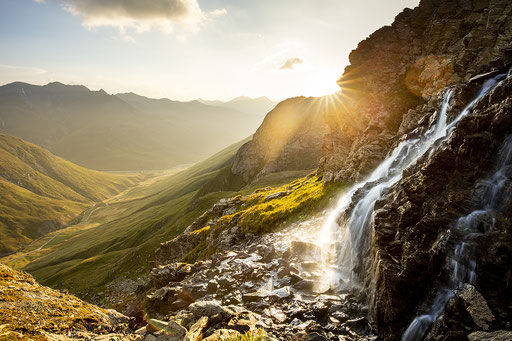 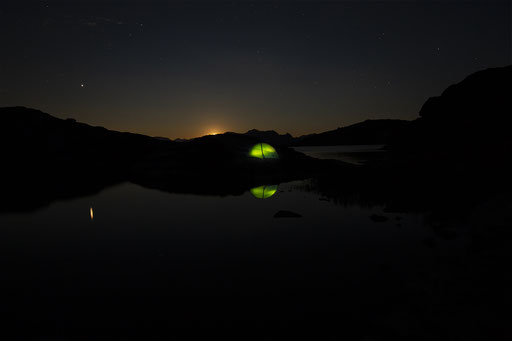 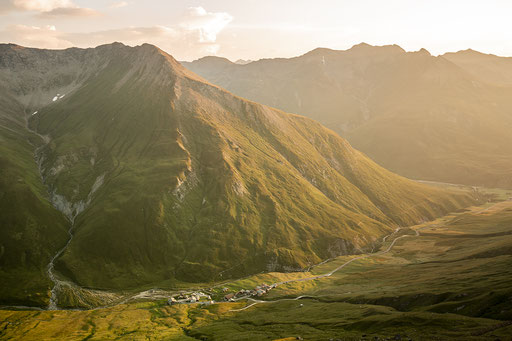 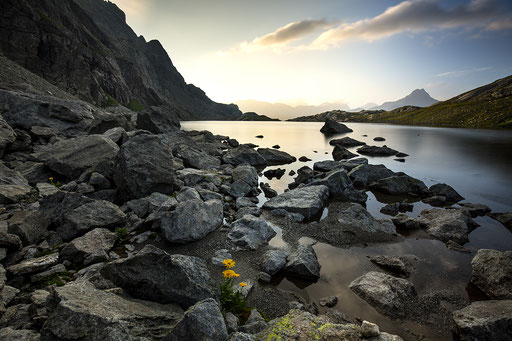